Except for hearing about saving up for the once a year buying opportunities at Madrona and for seeing the light of anticipation in my friends' eyes, I really didn't know what to expect. It was wonderful that Naomi is so organized and planned ahead for the room at Hotel Murano with four of us (saving $ means more to spend in the marketplace, and we had our own knitting circle right in the room!).
My biggest time preparation was to prepare food for George to eat while I was away for four nights. Among my advance preparations, I made Crab Risotto with goat cheese and fresh basil, White Bean Chicken Chili, and Steak Stroganoff with brown rice, and I stocked the refrigerator with vegetables. Of course, I didn't have to do it. George is perfectly capable of grilling steaks, frying up different kinds of sausages and bacon, and ordering Pagliacci's pizza. Enough said? 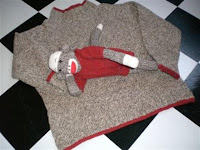 Wednesday, February 13th at work was a longer, more stressful day than I planned. The bright point was when I stopped for a lunch bite and George met me with the package he picked up at the post office. I've been coveting Rebecca's sock monkey sweater, and she e-mailed me when the Rowan DK marl came up on ebay in two colors. Without going into the angst I suffered while awaiting the end of the bidding (I'm not yet good

at auctions), we won both colors. George gave me the buttermint for Valentine's Day, and I bought the fudge to knit a topdown for him (no, we will not be matchy-matchy). The red accent for the sock monkey sweater is Judith MacKenzie's Elemental Effects from Two Swans Yarns at the marketplace.

I packed the car with too many small bags of yarn and knitting accoutrements (three trips to get them all to the hotel room where my roomies had just as much stuff per person) while playing with Maverick before I left. Arrival in Tacoma was a joyful relief, and a knitting circle was already going on in our room with roommates Naomi, Ellen, and one-night roomie Jen Black from Connecticut, as well as Danish designer Ruth Sorenson. So I listened to the banter and started my homework for Knitting Shapes with Margaret Radcliffe the next day. Ruth was knitting lace without light or a pattern, Jen was working on a lace shawl while wearing another, and Ellen and Naomi worked on one project for awhile, then switched to work on something else. Ruth looked at my homework since she would be in that class too, but she finished hers at breakfast the next morning.
The single chaotic moment was Jen's when she unpacked the Refined Aran Jacket (Interweave Knits Winter 2007) she had just completed and found that her hairspray had leaked all over her bag during her flight. Some color had leached from the Silky Wool onto some other clothing, so she had do some washing before she could sleep. The sweater was beautiful, and happily, there was no noticeable evidence of the event when I saw her wearing it on Saturday. 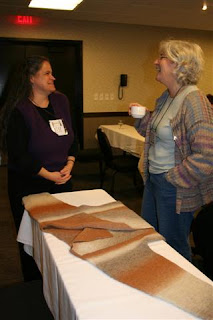 Margaret Radcliffe was fun for me to meet since I carry her Answer Book with me and use it when I get stuck. I enjoyed learning about planning how to knit shapes rather than just trying, frogging and trying again. The challenge for me was knitting with my two circular needles rather than using dp's since her calculations were based on dp's. I completed all the samples except the pentagon. We didn't knit a triangle sample, but two of my favorite items were using that shape. Margaret had a colorful triangle shawl that I didn't photograph, and this photo is of Margaret on the left talking with Ruth. Ruth brought in her triangle cardigan to illustrate Margaret's statement that "if you can knit a triangle, you can make anything." 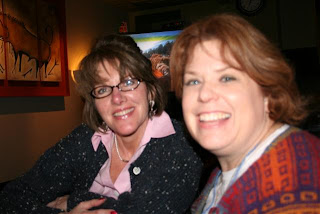 I lunched with Melinda, and after class went with Ellen (on the right) and Victoria from Village Yarn & Tea for a quick bite before charity night. We found our way to the front row to support a very nervous Naomi, who, nevertheless, gave an enjoyable account of her knitting internet connections while the audience joined in her experiences. It was my first time seeing Stephanie McPhee, so my first glimpse was of a gleeful, riotous pit-knitter of lightning speed. Somehow, I 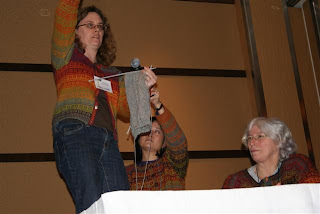 had pictured her writing and speaking rather than knitting, so it was a bit of a mind-altering experience. Ruth's talk was charming - her command of English is wonderful, and she is such a lovely person besides. I love that her blog includes English as well as Danish! Melinda's talk on Shetland was moving for me - it seems to be a recurring theme that traditions and cultures are lost in the crush for the appearance of greater opportunities and more money when truly, a "better life" might be had right where we are. 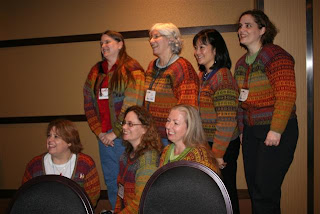 My first day at Madrona closed with a gathering of women who had knitted and were wearing Ruth's Kauni cardigan design. There are numerous images of the entire group, so I'm also including one of my friends: Ruth, Naomi, and Melinda (Ellen should have been in this as well.) The number of finished garments was a tribute to Ruth and the 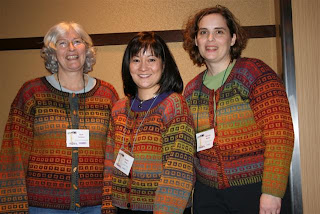 beautiful Kauni yarns - I wished I had knit my sweater in time for Madrona. Still, I have time before she is here again next year...

A 1st (or 47th) Anniversary celebration

This weekend has had glorious sun as well as the usual Seattle grey skies, and an early start for daylight savings time - this is a teaser for the ever-closer spring season. It's a fitting time for the Madrona Fiber Retreat afterglow, which I am still feeling three weeks later. I can still hardly contemplate anything that doesn't have to do with yarn and knitting needles, so I'm inside knitting, my justification for not being outside is that my yard bins are full until yardwaste pickup begins again on Wednesday.


Until last year, I thought of myself as a fairly accomplished knitter since I learned the basics at such an early age. There's nothing like experience and getting to know other knitters to shock me out of my lofty confidence. I now realize that years going by, even if I'm knitting (which I've done only sporadically), didn't give me the experience and new techniques that would contribute to the description of "accomplished."

A new friend, Jen Black (our emergency first night roommate at Madrona) put it well when she described the knitting community deprived area she comes from in Connecticut. She said there are knitters where she lives, but they don't have curiosity about how to do it better, different, or to explore the new techniques and ideas out there. I realize I had not pursued new knowledge, so I didn't know it was out there, and didn't know how much I wanted to look for it.


Then, last year at this time, I saw Naomi carrying some beautiful sock yarn (she was just back from Madrona) and asked her to help me learn to knit socks. I was never interested in knitting socks, but I had been aching to knit something besides a scarf. And sock yarns were so seductive when I allowed myself to enter yarn stores that I finally caved and decided to try them under Naomi's kind tutelage. She also recommended that I join a "Build Your Skills" class loosely structured enough to meet my needs at my skill level and fill in my gaps of knowledge. And, when buying my sock yarn from Ellen at Village, I found the class schedule and tried to sign up for the Build Your Skills class. It was full. But I signed up for the next class in March, and knit my socks while I waited for the class to start.


At class I met our instructor, Rebecca Bienn, and as she deftly troubleshot each student's challenges, my inspiration continued. I brought my stash list to the first class without the least idea of how to decide what to work on. I've continued in the weekly Thursday night class, even showing up at Village with a classmate or two when there is no scheduled class. Now, one year later, the result is that I am continuing to build my skills. And lest I get all full of myself and think I've reached some pinnacle of ability, I'm humbled every two weeks at the fair isle knitting group, Ferals, and by the amazing learning of my friends Naomi, Melinda, and Karen from Jean Wong at the Nihon Vogue course. Right now I don't aspire to the Nihon Vogue level of detail - today I'm thrilled with my custom fitting Top-Down Sweater (unpattern by Karen Alfke) and my newly conquered fear of trying new things. The difference is that I've been working with a "net." By having a knitting community, I've learned the generosity of knitters - most will take the time to share experience and knowledge so I'm trying new techniques and considering patterns I wouldn't have a year ago. A good life lesson, even beyond knitting.

Less contemplation next time, and something about my first Madrona experiences - with photos of my latest projects.
Posted by crookedneedles at 11:30 AM No comments: