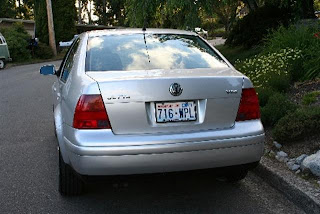 Thank you, Naomi and Jamie for your enthusiastic comments - being a novice blogger, it's fun to get your response and encouragement is a good thing! Since my last posting, I've been in the throes of choosing a used car to buy, and selling my beloved VW 2000 Jetta GLX. Several days on craigslist, and the Jetta is being sold next week to Daniel, a Microsofty (softie?) from Ethiopia, who I like very much and I think he will enjoy the heck out of my fun car.

I will continue driving George's "grampa car", his gold Buick Century, until next Friday, when I get to complete the purchase of my 1998 Lexus GS300. I was mulling over whether this was the car I wanted when the seller called to tell me he was going on vacation and wouldn't be back until July 26th. I couldn't meet up with him that day because I'll be at Stitch'n'Pitch, so we'll do all the paper work on Friday. This will be a good week! 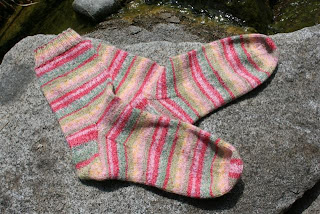 As promised, the next photo entry of my knitting is the pair of socks I knitted with Naomi's guidance. First I had to shop for yarn (and ended up buying yarn for three different pairs of socks), then needles. I hopefully bought 2's and 1's in circular and knit my swatches, then I bought the 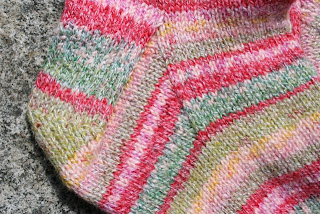 Addi 0's I've been using for every pair of socks since. I'm now working on my 4th pair since beginning, and my gauge is standing solid. This is On-Line yarn, and it was great to knit with. I did have some gapping at the top of the gusset on the first sock, but after reading Charlene Schurch's hint in Sensational Knitted Socks, I haven't had a gusset-gap since.

Next time I'll share a couple of my aran baby sweaters. The pattern is from a German knitting book, and I've knitted several variations over the years. I knitted three of them while I was working on my socks so I could begin to get my knitting chops back to where they had been.

In closing, and by request, here's a photo of George at a motocross race in Washougal, WA. As you can see, Maverick is not intimidated by a motocross jock. And that motocross jock isn't such a tough guy!


Posted by crookedneedles at 6:20 PM

It is sad to say good-bye to our cars. They are like members of our families. :) Nice pic of George - well mostly Mav! LOL!

Yes, great post! Love all the photos. That really is a good one of Mav and G! Looking forward to more posts!

Was hoping for a photo of the NEW car!!! I'll see it tomorrow but was hoping to get a preview!!!