George and I don't often travel far from home together. The dogs and George's dislike of flying can be impediments to scheduling, even when the trip is one we really want to take.

My cousin, Cindy, sent an e-mail asking when we were planning to visit my brother in Georgia, saying that her husband was scheduling his vacation, and they would like to meet us in the South. That was the seed of our October 30th trip to Savannah. It took some weeks to get George's commitment, then he was a full contributor to a wonderful vacation!
First step after the reservations was to secure good lodging for the dogs, and rather than asking friends or hiring a house-sitter, George toured Roscoe's Ranch and loved how they care for their "guests". We realized that the cost would be the same as PetsHotel, but at the Ranch, they would get more individual care and attention. Although the accommodations were full on Halloween weekend, they figured out a way to keep Poppy and Maverick during our 9-day absence. (The Ranch even sent us e-mail photos of the dogs playing.) George arranged everything from parking at the airport to the car rental while I arranged our hotel and touring plans.
The short review of our vacation is that the time with my brother's family and with my cousin and her husband was full and more fun than I dared imagine. My brother, Stan, and his wife, Susan, are wonderful hosts and tour guides with much knowledge and information to share about their adopted region. Cindy and her husband have a fresh and interested approach to life and were a joy as companions for spending time and seeing new things. I hope I get to see all of them more frequently as a result of this trip. A detailed version with photos follows, with only one knitting reference, so feel free to skim or just stop here, and I'll see you next time. My brother, Stan, moved about 8 years ago from Renton, WA to Richmond Hill, GA, about 20 minutes from Savannah. He and his wife, Susan, have a beautiful home there, and they have put in a lot of work to create charming interiors and gardens - staying with them for several nights was something like a bed & breakfast, including the food. Stan loves to cook, and since he works from his home, he was able to provide delicious meals. 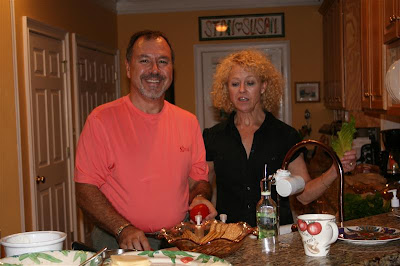 We arrived late on Friday evening; Cindy & Danny at midday on Halloween Saturday. For dinner, Stan planned to roast the leg of a wild boar he had hunted, and needed to go to the local flea market for fresh produce. After introductions, we piled into cars and headed for the flea market in spite of the 85 degree heat - big change for us Seattleites. What an assortment of things! I bought homegrown, cracked pecans to bring home and Stan bought a 10lb squash that he and George traded off carrying back to the car. We found treasures in the antiques section, Cindy stopped at each handbag booth, and we all got hung up for awhile in the puppy wing - however opposed I am to backyard breeding, puppies are puppies once they are in the world!
The roasted wild pig and the huge squash were delicious - we headed to our hotel completely full. We awoke quite hungry on Sunday morning and, with Danny & Cindy, decided to try Waffle House - they were everywhere, so we thought Why not? I'm pretty sure that Waffle House was the original definition of "greasy spoon" eating establishments; at least the one we chose. Anyway, we now know "why not!" 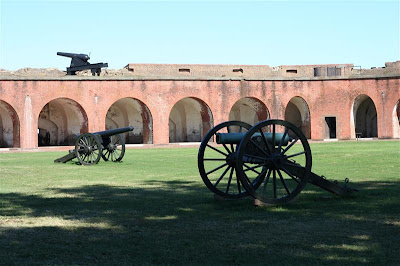 Stan & Susan first took us to see Civil War's Fort Pulaski - it was where the lessons about massive structures vs. modern naval weaponry were learned. We toured the perimeter, saw the quarters, learned about the Confederate uniforms (the hat was also a food collection bag) and saw a musket demonstration - the only downside was the no-see-ems that anonymously bite any exposed body parts not thoroughly doused with bug spray. 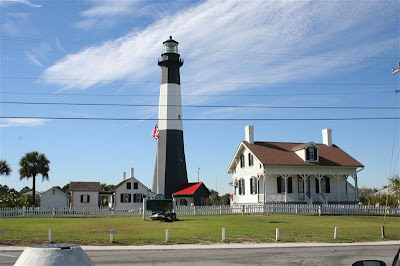 We went next to Tybee Island and saw Cindy's first lighthouse ever - then all climbed the 179 steps to the top. We were told that Sandra Bullock has a house on the island (lucky her!), but we couldn't spot which one. We hoped we would run into her during our visit since we are all fans, but no luck. 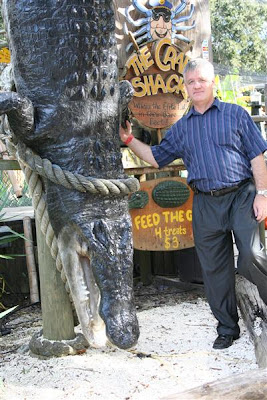 We ate at the nearby Crab Shack - another Southern institution, apparently. Famous for the grotto of alligators that can be fed by customers as well as the "boil" dumped onto the tables for consumption with hands, I was conscious of the great waste in the form of styrofoam serving dishes and plastic utensils. Cindy noted the huge bags of garbage just outside the entrance, resulting in fairly small appetites. 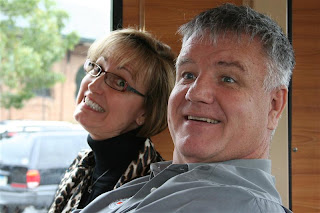 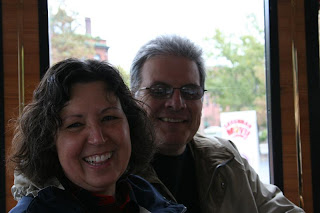 Monday turned out to be the chilliest day - in the low 60's - for our trolley tour of Savannah. We saw the museum, walked some, toured a couple of grand houses while listening to interesting stories, and got a sense of the city. Susan recommended this way of touring, and we thought it was great. I'd do it again on a future visit. Yes, we saw Paula Deen's restaurant, and no, we didn't go there. Our dinner was at Corleone's Trattoria after meeting up with my nephew at the new Bohemian Hotel above River Street. Back at Stan's Cindy shared her amazing scrapbooks of family history on our mom's side, and Stan was completely overwhelmed by the time we left for our hotel. I joined Cindy and Danny in their hotel room to watch Dancing with the Stars while Cindy and I wrote postcards to our cousins and moms. 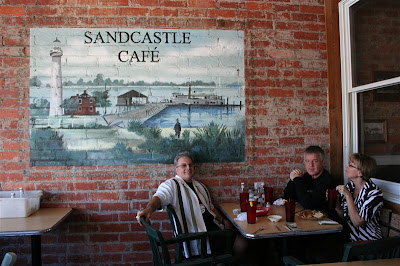 Tuesday we piled into one car, picked up Stan, and drove to St. Simon's Island. Temperatures were back up to the mid 70's and the tourist season was over so it was lovely and uncrowded. We each had a wonderful lunch - all different menu items! Mine was a fresh wild Atlantic salmon club sandwich... YUM! 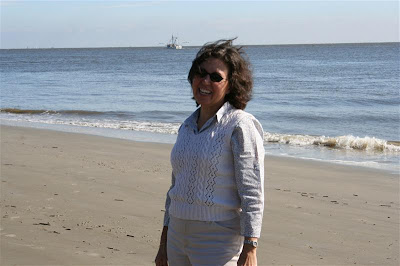 Here I am on the beach wearing my Louisa Harding cabled aran sweater vest for the first time (it was blocking when we packed for our trip, so I packed it flat in a plastic bag and dried it after we arrived). 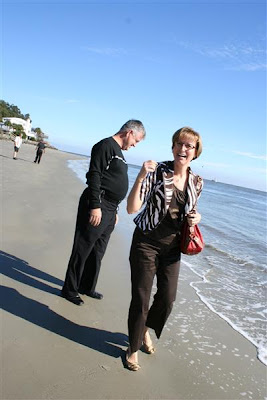 We put our hands in t 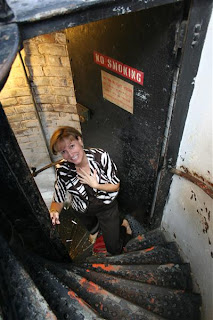 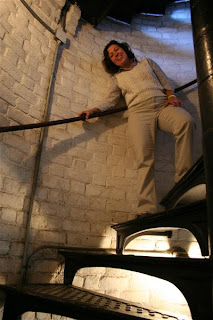 and climbed the St. Simon's light house (128 steps), then found many shopping treasures. It's a charming island community.

When we returned to Richmond Hill, Susan had made a delicious stew of the leftover boar leg, squash, and other savory ingredients - it was perfect after our day. George & I and Cindy & Danny left after dinner for our getaway night staying at the Mansion on Forsyth Park in downtown Savannah. 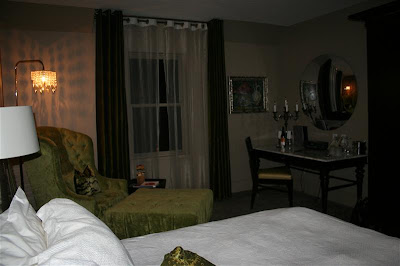 After seeing our rooms, we were like curious children tumbling over one another as we roamed all over the luxury hotel to see what there was to see. The antique hat display and the outdoor pool were both memorable - I love how Savanna folks seem to embrace their history and keep it as part of their identity.

We had a decadent breakfast at the hotel the following morning, then Stan & Susan met us for some shopping before saying goodbye to Cindy & Danny as they left for their six-hour drive home to Birmingham AL.
I was determined to see Wild Fibres, the only yarn store listed in Savannah. The store was in a lovely old building with a marble facade, had a great name, and didn't live up to the vision both suggested. (I'm a little puzzled about how a city with such size and cultural history has only one yarn store besides Michael's and JoAnn.)There were two people outside the door and a handwritten sign saying closed from 2:15 - 3:15pm. It was 3:25. Both young people waiting were SCAD students waiting to buy materials for their art projects - Wilma for a felted project and Josh for a fiber sculpture. We all chatted until the proprietor returned at 3:50, apologizing that she had to pick up her child after school. I did not find the Addi lace needles I was looking for, and no fiber products tempted me. Josh did not find his batting, but Wilma, at least, was thrilled to find what she needed.
Stan & Susan dropped us at the parking lot to get our car and as we pulled up to the exit kiosk to pay, there was another handwritten note saying the cashier would be right back, and indeed, she returned after 10 minutes or so. George is still amazed at this way of doing business - he wondered if it is a southern thing. We're convinced that leaving a business unattended would result in some truly bad customer behaviors here in Seattle. 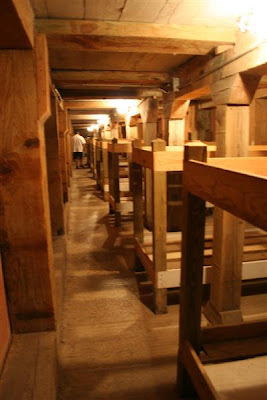 Thursday, Stan & Susan wanted us to see Fort McAllister since it was nearby and held out for four years before it fell and Union soldiers took Savannah. It is an underground fort which is, again, largely intact. The self-tour visitors can take by reading the handout as they walk from point to point is quite informative, and we had a real sense of what it might have been like to live there. Although my interest in the Civil War is limited, I had a real sense of history through the tours and the museums... it was a terrible time. 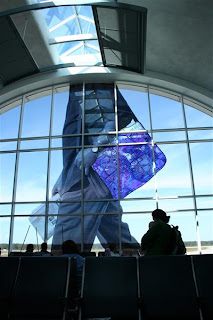 We drove back to Jacksonville, Florida, to fly home (we liked the graphics on the window above at our gate), and agreed that it was a wonderful vacation. George has been describing Savannah to anyone who will listen as a great place where the houses have character and it was warm in November.

I loved visiting with my brother and his family, and finally getting to spend time with my cousin and meet her husband after all these years. I was crazy about her when we met at 16, then life and distance kept us from maintaining our friendship. Danny and George are also well matched; Cindy and I laughed when we noticed them naturally speaking boy-code, and liking many of the same things. George is interested in another visit to the Southeast, and Cindy & Danny are considering a trip to Seattle in spring of 2010. We'll be happy to see them any time.
Posted by crookedneedles at 7:00 AM

Great post! Makes me want to take a trip there...after the hot, humid summer though. Sound like you went at the perfect time! Thanks for sharing!

Great photos. I love reading about other peoples travels as I rarely get on a plane myself (it's not just George) so thanks for the tour!